What If We Got Rid of All the Mosquitoes?

What If We Got Rid of All the Mosquitoes?

Did you know that mosquitoes are the deadliest animals on the planet?  That’s right.  Those tiny buzzing insects cause nearly 1 million human deaths per year, far more than the typical rulers of the animal kingdom that we’re usually afraid of like sharks, lions, and bears.  With the recent spread of Zika virus, concern over mosquito-borne illnesses is at a higher level than ever.  So much so, that the federal government is even stepping in to help effected countries and take preventative steps to stop it from worsening.  In addition to Zika virus, other mosquito-borne illnesses like malaria and dengue fever infect millions of people every year.  It seems like mosquitoes are turning out to be more trouble than they’re worth.

So, what would happen if we got rid of them all?

What do mosquitoes contribute to the environment, and what would the cost be for removing them from the equation?  Unfortunately, it’s not that easy.

There are over 3,500 species of mosquito, most of which pose no threat to humans because they live off of nectar from fruit and plants.  However, females from a small fraction of those species use human blood to help develop eggs.  And an even smaller fraction of those carry the parasites that cause disease in humans.  Such species include Aedes Aegypti, Aedes Albopictus, and Anopheles Gambiae that spread diseases like Zika virus, dengue fever, yellow fever, and malaria. 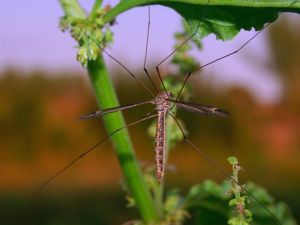 Scientists estimate that a total eradication of mosquitoes would have some widespread negative side effects.  Since the majority of male mosquitoes feed on fruit and plant nectar, wiping them out would remove important pollinators from the eco-system, damaging the plants that depend on mosquitoes to survive.  Sadly, that includes orchids and many other flowers .  Mosquito larvae are also a large food source for animals such as fish, birds, and bats, so their disappearance would impact the food chain.  Beyond this, scientists admit that it’s difficult to estimate the complete impact a disappearance of mosquitoes would have because they are difficult to study in nature.  Eco-systems based on larger mammals like lions and snakes are easier to study and understand because the animals living there are, well bigger.  Ann Froschauer, a public affairs specialist for the U.S. Fish and Wildlife Service said,  “Removing mosquitoes entirely could have consequences we can’t predict.”

Other Solutions for Mosquito Control

If removing mosquitoes completely is too risky, what about a partial eradication of the most dangerous species?  Scientists refute the argument that the food chain would suffer without mosquitoes by saying that other insects, especially non-harmful mosquito species, would simply fill in the gap.  Biologists have even suggested genetic modification to eliminate certain mosquito species, like Aedes Aegypti.  The biotech firm Oxitec tested a modified version of the male mosquito that produces underdeveloped offspring, which die before reaching reproduction and developing the ability to spread harmful diseases.  Releasing 3 million of these insects on the Cayman Islands in 2009 resulted in a 96% reduction in mosquitoes only a year later.  Brazil, a country dramatically affected by Zika Virus, is in the middle of a trial with these modified mosquitoes and already reports a 92% decrease in numbers.

There is, of course, concern about using this method.  Not only is there an ethical dilemma of purposefully eliminating an entire species, but to do so through genetic modification is expensive and needs a lot of resources to work.  Luckily, scientists are constantly in search of other solutions.  Scientists at the London School of Hygiene and Tropical Medicine are studying how mosquitoes are attracted to certain types of body odors, helping to create more effective repellants.  Likewise, the Eliminate Dengue Program in Australia is researching a way to reduce mosquitoes’ ability to spread disease by infecting them with natural bacteria that make them resistant to parasites that cause illness.

So, a complete wipe out of mosquitoes isn’t in our near future.  But while scientists are busy in the labs inventing solutions to manage the issue, there are plenty of steps you can take at home to protect you and your family against mosquitoes and other pests, such as eliminating sources of standing water.  Mosquito Joe is here to help as well, adding another layer of defense against mosquito-borne illnesses like Zika virus.  Contact your local Mosquito Joe for more information, so you can get summer started early and enjoy being outside again.