When we discuss the types of insects that we can manage in your yards, we often speak about mosquitoes (duh), fleas and ticks. But there aren’t many insects that can escape Mosquito Joe in your yard.  One in particular is the stink bug, which thrives around this time of year as they seek warmth to sustain them for the winter. 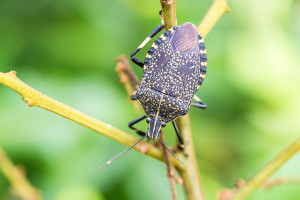 Generally, stink bugs prefer to be outside.  They won’t reproduce indoors and their food is outdoors, so they won’t try to move inside until it starts to get cold – usually right around now in most areas of the country. They tend to sneak in through small cracks and openings in chimneys, door and window frames, air conditioning units, attic vents and holes in a home’s foundation. They’re mainly looking for a warm place to spend the winter. Stink bugs reproduce 4 times a year. Each time a stink bug reproduces, it lays between 20-30 eggs on tree and other plant leaves. With no natural predators in the United States, multiple reproductive cycles, fast development and an ability to travel easily, the population of stink bugs has grown tremendously and they’re spreading fast across the country.

If you have stink bugs in your house, vacuuming them up is the best way to get rid of them without the smell they can bring along. Be sure to use a vacuum with a bag that you can remove, seal up and discard when you’re done. Flushing them down the toilet also works. Whatever you do, don’t smash them.  Not only do they smell bad, but their odor attracts other bugs. That said, while they’re unpleasant, stink bugs don’t bite or sting and they don’t carry any diseases like many other insects. Mainly they are just annoying and they will eat your fruits and veggies and some trees and shrubs.

This map shows the prevalent areas for stink bugs in the United States. If you notice you’re in one of the states with infestations, keep an eye out on plants in your yard and along windows, doors and siding. Try to make sure you aren’t giving them a warm place to hibernate for the winter or a reason to stay around your home.

Some steps can be taken with certain treatments to the outside of your home to help reduce and prevent stink bugs from finding a home on your property. Contact one of our Mosquito Joe pest control professionals for more information.