Mosquito Joe has achieved tremendous growth since we began franchising in 2012. Thankfully, that rapid growth allowed us to quickly reach a point as a system to find a cause that we could partner with philanthropically to give back and share some of the success we’ve achieved as a company. It was important for us to find a cause that aided in the fight against mosquito-borne illness as well as helping those in our community. Local blood banks across the nation and United to Beat Malaria are the perfect partners for our MoJo Bites Back and Beat the Bloodsuckers initiatives.

United to Beat Malaria and Our Partnership 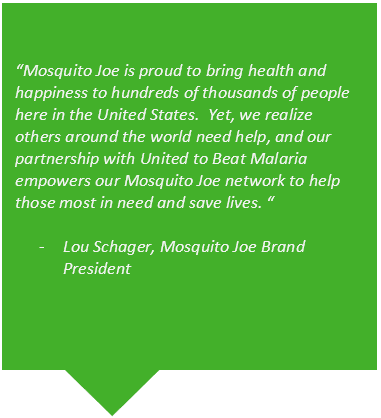 United to Beat Malaria (formerly Nothing but Nets) is the world’s largest grassroots initiative started by the United Nations Foundation to raise awareness and funding to fight malaria, a leading cause of death among children in Africa. It only takes $10 to send TWO life-saving nets. The $10 contribution goes towards the cost of purchasing two long-lasting, insecticide-treated bed nets, distributing, and educating communities on their use. That price point makes it extremely easy for anyone to contribute.

Since May 4, 2017, Mosquito Joe has been a proud partner of United to Beat Malaria, helping to raise awareness and funding to fight malaria. To achieve our common goal of eliminating the mosquitoes that transmit diseases, we participate in various campaigns to send life-saving nets to those in need. Since the start of this partnership, we have raised over $80,000 providing about 8,000 treated bed nets (and counting) that help protect vulnerable families in sub-Saharan Africa, Latin America, and the Caribbean from this preventable disease.

Giving back to the community is at the core of what we do at Mosquito Joe. We aim to make outside fun for families in our communities and ensure their yards are itch-free. However, we know that mosquitoes are more than an annoyance, they are a health concern for people across the globe. Enjoying an itch-free yard is a luxury for us in the United States so with donations from our loyal and gracious customers, we can create more protected living conditions for those at risk of malaria.

Mojo Bites back partnering with United to Beat Malaria throughout the year to help us reach our goal of raising $10,000. Help us in our continuous effort of keeping families around the globe protected by donating.

Every year, the American Mosquito Control Association recognizes the third week of June as Mosquito Control Awareness Week (MCAW). MCAW is a time to educate the public about the significance of mosquitoes in our daily lives and the important service provided by mosquito control workers.

Mosquito Control Awareness week is close to our hearts here at Mosquito Joe, as we believe in the importance of enjoying your backyard without the worry of pesky mosquitoes and the potential illnesses they may carry. While we work all year long to educate our communities about mosquito control and mosquito-borne illnesses, MCAW shines the spotlight on professional mosquito control and why we need it.

Our Beat the Bloodsuckers campaign takes place during Mosquito Control Awareness Week (MCAW), which is the third week in June and has 2 core goals:

Franchise Business Owners partnered with United to Beat Malaria will donate $10 for every new customer who signs up during MCAW. In the past, $10 donations supplied one-bed net to families in need. However, as of 2019, we are excited to announce that $10 now covers the cost to purchase and ship TWO-bed nets, as well as educate the recipient on its proper use. It helps us reach our goal by spreading the word to those around you to sign up for a service or by donating. Help us continue to support local blood banks, by setting up an appointment to donate blood and by spreading the word to your friends and family about signing up with their local Mosquito Joe for MCAW!