**Occasionally we like to provide a blog post that will help you get to know Joe. From our technicians to our corporate staff to our hardworking franchisees – we think our company is full of people you ought to know!**

Today we’d like to introduce you to Robert Rummells, a retired Army Ranger who hails from Iowa.

Robert has admitted he’s not a “cubicle kind of guy,” so when he was researching the perfect franchise opportunity, he knew it couldn’t be just any business opportunity.

Army Ranger Zoned in on Mosquitoes

Originally from a small town in Iowa called West Branch, Robert was living in Los Angeles playing semi-professional football for the San Fernando Valley Freelancers, where he met and married his wife Christine. After playing football for one year, on January 14, 1988, Robert enlisted in the United States Army where he became an Army Ranger and was assigned to the 1st Ranger Battalion at Hunter Army Airfield in Savannah, GA.  Robert retired from the US Army in March 2009 after a 22 year career.

After he retired from the Army, Robert still felt a strong urge to serve the community he lived in. This brought him to serving as Chief of Staff for Delegate John Welch in the General Assembly of Virginia in Richmond, specifically in the House of Delegates (e.g. Representatives in other states). So after two decades in the military and almost ten years in politics, what would be next for this non-desk guy who really enjoyed being an integral part of the community in which he lived? There was a job fair for military veterans in February 2013 and that is where the bug was put in his ear about Mosquito Joe! It was the perfect fit, working for himself, being outside, and bringing relief to the residents of Richmond from pesky bugs.

“For three years, I had been searching the internet for a franchise opportunity. It came down to six or seven companies, but there always seemed to be one or two areas lacking that just didn’t fit the bill….Mosquito Joe is very turn-key. Though my list of to-do’s has been lengthy, there’s been help every single step of the way. It’s been wonderful having such a good support system for the business.” 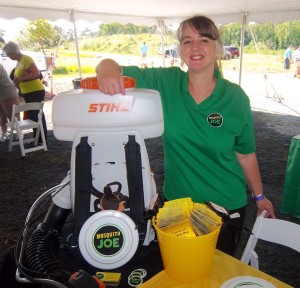 Don’t worry, he didn’t forget Christine. Together they launched Mosquito Joe of West Richmond in May and once they hit the ground running, they never looked back. Rummells was even featured in Bloomberg Businessweek on his post-military career of making the mosquito his new enemy. He has goals to expand in the Richmond area and maybe even bring Mosquito Joe to his hometown in Iowa.

We couldn’t be happier to have Robert and Murph as part of the Mosquito Joe family and wish them the best of luck. If you’re interested in mosquito control services in the Richmond, VA area to rid your yard of pesky mosquitoes, ticks and fleas, visit the Mosquito Joe of West Richmond website or call their office at 804-767-5220 ext. 859 for more information or a free quote.