Lyme disease is the most commonly reported vector-borne disease in the United States. There are over 30,000 cases of the tick-borne illness reported each year. Among those are celebrities we frequently see on TV or on magazine covers; others are sports icons and some are Grammy award winners.

Pop sensation, Justin Bieber, announced his battle with Lyme disease in January 2020. “It’s been a rough couple years but getting the right treatment that will help treat this so far incurable disease and I will be back and better than ever,” Bieber said. The singer plans to use his voice to create content on YouTube about the chronic illness.

Members of the Hadid Family

Yolanda Hadid, of The Real Housewives of Beverly Hills fame, has been vocal about her battle with Lyme disease. Yolanda has published a book chronicling her experience living with the illness entitled “Believe Me: My Battle with the Invisible Disability of Lyme Disease.” Recently, the former model admitted after nearly a year of remission, her symptoms have returned. At the Global Lyme Alliance, Yolanda said she realizes “the higher purpose of [her] journey is to continue to bring awareness to this awful disease until the change is made.” Her children, Bella and Anwar Hadid, also have the chronic illness.

The country singer opened up about her struggle with Lyme disease in July 2018, stating she suffered from dysphonia which affected her vocal cords. The disease kept her from touring and even singing. “I never thought I would sing again,” Twain said. Thanks to physical therapy and vocal training, Twain has released a new album and resumed touring.

Nearly 18 years ago, the actor was bitten by an infected tick. The result was numerous bouts of severe Lyme disease symptoms. Because of his struggle, Baldwin is vigilant in checking his children for ticks after they’ve been outdoors. “I want my kids to grow up riding horses and bikes and enjoying themselves every day and not have to spend every day with us going over them with a magnifying glass to make sure they don’t have any ticks on their body or their dogs, but that is part of the lifestyle of where I live,” he said.

In a letter to fans, Lavigne revealed she had been fighting Lyme disease. The singer started The Avril Lavigne Foundation in 2010 to support causes such as Race to Erase MS, Special Olympics, and UNICEF, in addition to Lyme disease. In October 2018, Lavigne joined the Board of Directors for the Global Lyme Alliance. Her most recent album, “Head Above Water,” addresses her battle with the chronic disease. “This is me and my fight. This album tells my story,” Lavigne said.

Kristofferson’s doctors originally told him his deteriorating memory was due to Alzheimer’s disease. After many years of strenuous testing, it was clear the singer had been misdiagnosed; after a positive test for Lyme disease, his symptoms were correctly identified. With the proper treatment, Kristofferson’s condition improved. A friend said of the iconic artist, “Kris is as sharp as he’s been in the past 20 years because of his treatments.”

In 1991, the former New York Mets pitcher was diagnosed with Lyme disease. At the time, “Tom Terrific” lived in Greenwich, CT and spent the majority of his time outdoors, which is how he contracted the illness. The Baseball Hall of Fame member described the disease’s symptoms as “the worst case of the flu every day.”

Prevention is the Best Medicine

The symptoms of those suffering from Lyme disease are different but the cause of the illness is the same: infected ticks. These celebrities give visibility to Lyme disease and advocate for treatment and a cure.

While it’s important to be mindful of ticks when camping and hiking, they can also be found in parks, walking trails, and even our own backyards. Tick prevention can start at home by eliminating places where ticks like to hide. Keep your yard mowed and trees trimmed. If you are in an area where ticks are active, make sure to wear long sleeves and pants and apply a tick repellent with DEET or Permethrin. 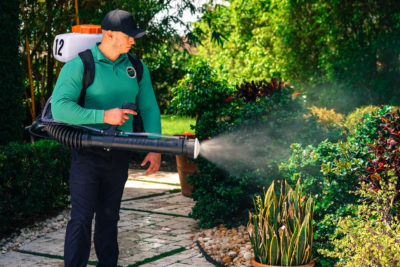 Mosquito Joe knows what a pest ticks can be, that’s why we offer tick control as one of our signature services. We target bushes and shrubbery, which helps keep ticks out of your yard and creates a barrier around your property, protecting you against the risk of tick-borne illnesses. Call us today at  or request a free quote on our website.

To learn more about Lyme Disease or other illnesses that are caused by outdoor pests, visit our learning center.