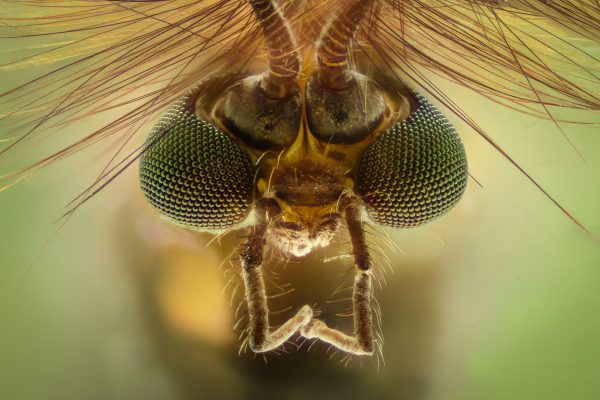 Have you wondered about mosquito vision? Maybe yes, maybe no, but you’ve undoubtedly experienced first-hand that these pesky insects manage to bite at all times of the day.

Perhaps you’ve even heard some of the latest research that indicates mosquitoes are attracted to the color red. Before you throw out all of the red clothing you own, let’s dig a little deeper to uncover the facts behind mosquito eyesight. The truth is that mosquitoes use their sight but also olfactory senses (sense of smell) and thermal cues to find prey for their blood meals.

Read on to see if there’s any good strategy for avoiding their bite!

First, How Do Mosquitoes See?

The human eye has one large lens. Mosquito eyes have hundreds of small lenses called ommatidia. These enable the mosquito to see in several directions at one time and to detect movement.

Mosquitoes see in black and white and perceive outlines and shapes rather than crisp, clear details like humans. When they’re on the hunt, mosquitoes use their two compound eyes but also their thermal detectors (located in their mouths) to seek out the prey and move in for the bite.

When the mosquito flies within 15 to 50 feet of you—day or night—you’re on their radar, giving them the option of moving in for a meal. Of course, only female mosquitoes feed on blood, so absolutely no worries if you’re dealing with a male mosquito (not that you are likely to know either way).

How Many Eyes Does a Mosquito Have?

A mosquito has two compound eyes—one on each side of its head. Although there are only two eyes on each mosquito, their vision plays a major role in prey detection.

Can Mosquitoes See in the Dark?

Yes, mosquitoes can see you in the dark. They have excellent night vision and can detect objects at low light far better than humans can.

Mosquitoes use multiple senses to “see” humans, including their sense of smell, vision, heat detection, and, yes, if you’ve been wondering, even carbon dioxide detection. The first thing that typically attracts a mosquito aside from them seeing you is an exhalation of carbon dioxide. Mosquitoes have sensors to detect CO2. Then, they use their other senses to zero in on the prey.

New research indicates mosquitoes are especially attracted to the color red, including the reddish aspects of all skin types. Human skin—regardless of the pigmentation—gives off a long-wavelength signal in the red-orange range. So, when exploring the great outdoors, it’s a good idea to cover as much of your skin as possible.

When Is the Best Time to Be Outside to Avoid Mosquitoes?

If you’re outside, you can almost guarantee some mosquito may be seeking you out. However, the majority of mosquitoes venture out at night to avoid the sunlight that can dehydrate them or even kill them. The daytime poses less of a mosquito threat to you and your family members, but it’s still common to get a bite during daytime hours.

Related Topic: How Many Times Can a Mosquito Bite You?

Mosquito Eyes Freaking You Out? Give Us a Call

If you’re hoping to find a better way to escape mosquito vision to spare you and your family from itchy bites, there is a way. Turn to the reliable team at your local Mosquito Joe for the top mosquito-repelling solutions for your property, including natural barrier treatments. Give us a call at 1-855-275-2563
or request an estimate online today.